This is a report on how we realized the 4K DCP of Tears of Steel for theater distribution. Our tools of choice where:

In this simplified process of DCP mastering we will go through few linear steps, such as:

First off we need to generate an image sequence of the whole short film, using an appropriate image format, such as TIFF 16bit sRGB. In our case we are talking about 17616 frames, taking 850GB of space. The 4K DCI compliant resolution for our aspect ratio is 4096x1716px.

Once the export has succeeded, we can convert that image sequence into a JPEG2000 12bit XYZ sequence (with a .j2c extension). In order to do this operation we use OpenDCP, a great Free tool that offers both a GUI and a CLI. Once converted, the image sequence for the short film will become around 12GB. 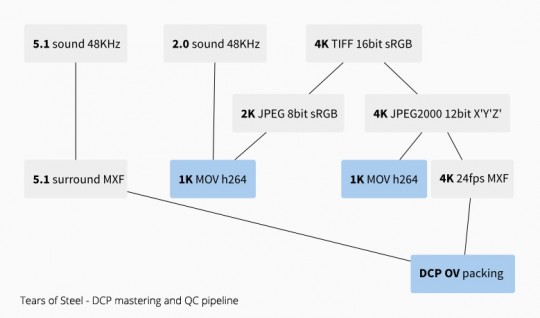 In order to speed up the process and skip the 16bit TIFF generation, we tried to export the edit in JPEG2000 XYZ directly from Blender (with the benefit of using a render farm) but the image format was not accepted by OpenDCP for the mxf wrapping. Hopefully this will be fixed in the future as it saves quite some time and storage space.

The next step is fairly simple and consists in wrapping the JPEG2000 sequence and the surround sound tracks (6 mono 48KHz wav) into two separate Multimedia eXchange Files containers. The operation can be accomplished with OpenDCP.

The last step consists in indexing the just created mxf files and giving a proper name to the DCP (so that it can be correctly handled by the Digital Cinema Servers). Open DCP gives good support also in this area.

Finally, the folder can be either zipped and uploaded to a location accessible to the DCS or copied (unzipped) into an ext3 formatted drive for direct ingest in the DCS.

DCP making is a process that involves many steps. This means that any step can go wrong and should be quickly, flexibly and easily fixed. Most common problems regard image encoding, corruption and sound sync problems.

Since we did not have a Digital Cinema Server in the studio, nor a DCP Player (EasyDCP Player demo works only for the first 15 seconds of the film), we had to check the TIFF and JPEG2000 image sequences in a different way. We set up different blend files using the VSE in order to generate preview movie files with sound to check sync and bad frame issues (like the one in the header of this post, due to NFS issues when using too many Blender instances with touch and no-overwrite).

With a script we would delete one or multiple frame ranges simultaneously from the TIFF, JPEG2ooo and JPEG directories so that we could then run the TIFF export -> JPEG2000 and JPEG -> movie preview pipeline with the no-overwrite option on. 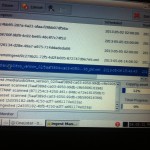 Other things that happened while making the DCP.

The fifth DCP actually worked fine but then we had some other issues:

All in all this was a good experience and hopefully this article will save some time to someone else trying to do the same. In the future it would be really great to have: