Here’s a great story of the fun and success of the Open Movie’s Creative Commons Licences and the creative freedom that they allow. Because now there is also a chinese Version of Tears of Steel! They had their own actors, reshot the entire movie and combined it with the CG assets of Tears of Steel. It’s so cool to see them reenact all these scenes from our movie. And their Techhead is at least as crazy as ours! :)

Apparently it was a project from the Chinese Academy of Sciences Institute of Automation (http://english.ia.cas.cn) with the goal to build a team and explore the pipeline and workflow for future commercial projects. Further down Ethan Luo from the chinese Blender community shares some infos about this remarkable remake. Check it out!

Here’s a splitscreen version that reveals a bit more how they created this epic version of Tears of Steel!

It’s always great to see people using the open movie assets in their own projects, but seeing the love and detail that went into this one is simply awesome. Having worked on the original Tears of Steel myself I know what a pain greenscreen keying, rotoscoping and sometimes object tracking can be, but these guys did a great job, especially since they didn’t have access to a high end Sony F65 camera that produces supercrisp footage nor a luxurious giant well-lit greenscreen studio, so they probably had to deal with a lot more problems with keying and tracking.
So hats off to the creators of this “Tears of Steal”! I think it’s a great encouragement for everyone to actually use the open movie assets, use them for your own creations and learn from them!
:)

END_OF_DOCUMENT_TOKEN_TO_BE_REPLACED

Here’s a short demo of one of the scripts that you can find on the DVD in the Mango SVN scripts folder. It’s called space_node_viewer_bookmark.py.

It’s a small utility to make navigating huge node-trees a bit easier, and we had a lot of those.
All the time while I was working with these huge node setups I thought that I would love to be able to define certain checkpoints in the node-tree to be able to quickly connect the viewer node to them to check out the result without having to zoom and scroll like crazy. Also jumping to the last node or comparing the result before and after some nodes was something that I always wanted to have. END_OF_DOCUMENT_TOKEN_TO_BE_REPLACED

One of the very last minute changes to our was to add some extensions to the Captain’s eyepatch. This happened the 2 weeks after  the pre-premiere of Tears of Steel. The original eyepatch just felt a little bit naked. I mean, after all it’s just a disassembled webcam with red LED, taped to a metal strip. So we thought that maybe we could enhance that a bit.

Kjartan modeled a small but very effective extension, and Ian created a holographic text overlay, which goes really well with the other holographic elements in the movie. All in all there were 16 shots where you see the captain’s face, there was quite a bit to track and composite. Luckily lots of these shots are quite similar so a lot of the lighting and composite setups could be copied over.

END_OF_DOCUMENT_TOKEN_TO_BE_REPLACED

Today Ton setup an old Silicon Graphics Workstation at the Institute and installed TRACES on it, the predecessor of Blender. Totally amazing, because it already was very much similar to what later became Blender 2.49, and even in the current Blender you can see these roots.
If you want to see this live and in action come to this year’s Blender Conference!

Some more phodos from the premiere (there will probably be even more in the next couple of days).
It was such a great evening!
We really enjoyed it and had lots of fun. Seeing the movie finally on the big screen with Joram’s awesome soundtrack was just great.
Now some days of recovery and then we’ll start polishing everything so we can present it to you guys!
Cheers!! 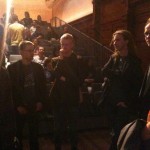 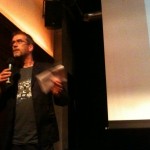 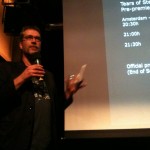 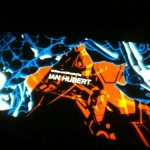 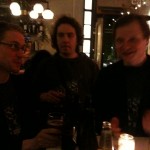 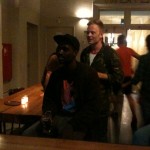 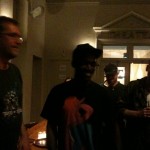 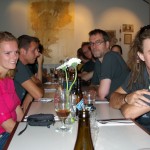 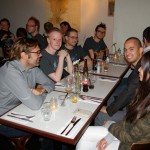 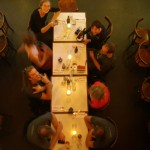 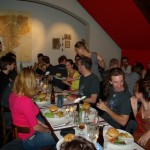 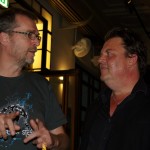 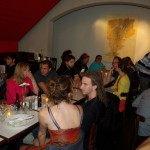 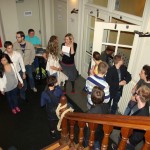 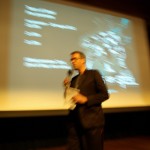 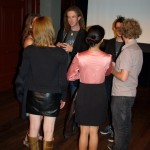 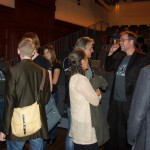 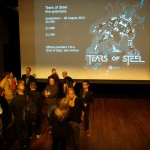 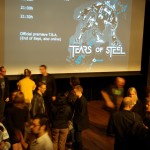 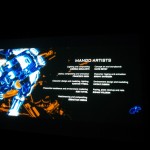 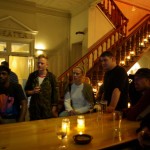 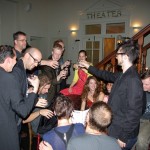 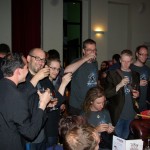 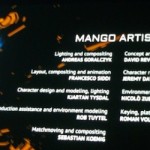 It’s weekly time again!
Since Ton has been visiting Siggraph last week and hasn’t come back yet we are doing the weekly without our beloved boss. And in 2 weeks it’s already premiere! OMG!

Time is flying like crazy, and we only have 3 more weeks to go until pre-premiere.
So we do a little bit of time-travel and go back 1 week in time when we have a whopping 4 weeks left until premiere and do some interviews and random stuff to give you some impressions from the studio.

And now it really is crunchtime!

This week’s weekly will be presented via Twitcam. I just cannot get Google Hangout to work. We are just not very technically skilled… :)

This will probably be the most boring video of the whole project, but maybe someone finds it interesting. It is a timelapse demonstration of how we convert the footage from the RAW Sony F65 footage into something more useful, which in our case is OpenEXR in ACES Color Workspace. For that first conversion we have to use the F65 Viewer from Sony, which only runs on Windows and OSX, and also is not the most pleasant software to work with. Anyway, once we have the ACES EXRs we convert them to rec709 linear with OpenColorIO, which is Blender’s native colorspace, and we stay there as long as we can.

The whole workflow is maybe not very elegant, but so far it works quite well.
We also have to deal with 3 different naming conventions, which is the camera’s naming of the clips, the shotnumbers used on set (seen on the clapperboard) and the shotnumbers that we use here in the studio. Therefore part of my job is to keep track of the framenumbers, shotnumbers, In-Points, Out-Points, foldersizes, and so on. I have to find out which shot is used in the edit, which part of the shot is used and how long it is, in order to export and convert only what’s necessary.

After the conversions are done, and linear HD proxies have been generated, we erase the ACES files. Because oftherwise we would run out of diskspace very soon. Each frame is 50MB.

An epic teaser deserves an epic blogpost.
So here it is:
TEARS OF STEEL