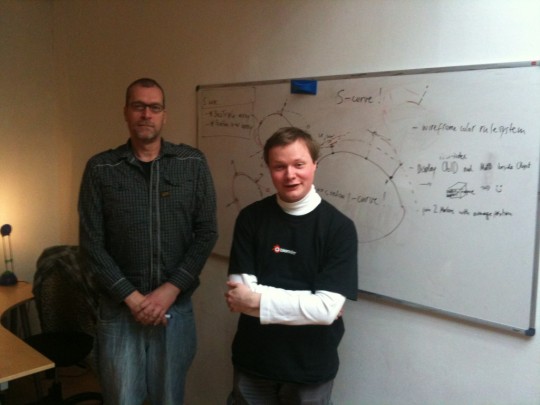 We didn’t forget what Mango is really about; which is of course to help improving Blender!

Last Monday we had two meetings with the devs & artists, on cycles and general issues. Yesterday we discussed pipeline designs. This morning we worked out a design idea for curve editing for masks. Time for an update :)

Other Blender topics, lessons from past week

Sebastian presented a cool diagram showing the data and workflow. Jeremy explained the data structure has we used in past (for sintel). Agreed is that Sebastian will become our “pipeline manager” and report and design issues further, he will pick this up next week when his tracking dvd training is done.

This morning we had a fun session together (Sergey, Sebastian, Francesco, Ton) on efficient ways to draw and edit masks, with efficient but advanced control over local feathering. This lead to a design proposal I nicked S-curve (Sharybin curve :)

If this S-curve idea works will be figured out later, but the theory & design is promising. Back to coding! :)