Apparently you can’t do a computer graphics without using computers. But which exactly computers and how much of them we’re using?

Studio server is a fancy dual-Xeon system with 12 Gb of RAM. Both processors are quad-core with hyper-threading support running on 2.27Ghz. Own hard disk space is only 146Gb SCSI disk (which means it’s superfast), but there’s external hardware disk array attached to this server. In fact, there’re are two raid arrays there: one of them is only 1Tb which is used for day-to-day shared folder and production svn, and another one is 5Tb array used for rendered data. I’m not sure about raid levels used, but think it’s raid-1 (mirror) used to smaller array and raid-5 used for bigger array.

It’s a headless server so there’s no fancy video card in this computer.

Currently we don’t have justacluster running (probably it’ll be configured this week), so there’s only 4 Dell nodes which are used by render farm. Each Dell node is a dual-Xeon station and it’s also quad-core processors with hyper-threading support and they’re also running on 2.27Ghz. They’ve got 24Gb of RAM and 160Gb space on a SCSI disk.

This is also headless systems.

Developer’s room
In the developers room we’ve got two running machines. One of them is dual-core Intel Core 2 system running at 3.0Ghz, 4Gb RAm and video card is 8800 GTS. This machine isn’t actually used at this moment and i hope we’ll collect a bit better configuration here when Brecht will arrive working here. Another system in this room is a quad-core Intel Core 2 system running at 2.66Ghz with 8Gb RAM and the same 8800 GTS video card.

We’ve got two separated networks here. One of them is used by computers in the studio and another one is used by render farm. In both cases it is gigabit network and separation is needed to reduce network latency caused by network activity of render farm and artists. To be more fancy studio computers are attached to gigabit switch which is connected to server with 10GBit connection.

Benchmark was done using BMW model from Mike Pan which you can find in this blenderartist thread. There were 4 setups: FullHD (1920×1080), HalfHD (960×540) with CPU and GPU rendering. There’s a time taken for rendering by different systems (time in brackets is time of HalfHD rendering).

And here’s some charts to show differences better: 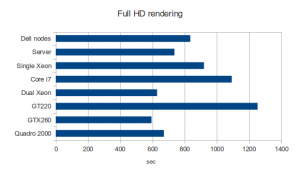 Just in case, note, that benchmark results posted in that blenderartist thread is made for HalfHD resolution.