The biggest focus this week was trying to get the shootout scene in the scientist’s tunnel completed. As with everything, it was a crazy balancing act of figuring out the right ratios of feasible render times to sample rates to noise reduction.

Just figuring out how to light realistically in cycles has been one of the biggest challenges. Cycles is incredible for smaller stuff, but once you get up into massively complex environments, it starts to slow way down, and you have to start throwing more and more cheats in there to make things really work. We know what we’re going for, but sometimes it’s a bit like learning a new language to figure out how to make the tools do what we want.

That said, we must be learning or something, because everything is looking better and better.

The big unknown right now is trying to guess how much of the time we’re spending is due to learning/inventing the workflow, and how much of it is indicative of how long it actually takes to finish a shot (in which case, we’re doomed!) The scene we’re working on now is taking 2-3 times longer than we’d originally set aside for it- but it’s also one of the most complex scenes.

The scene is the one where the scientists have to take up arms and defend the bottleneck between the old church and the dome.

(this is from 2-3 weeks ago, and not indicative of any of the recent stuff- but it’s all I got on hand!)

The scene starts with the scientists putting their arms into the ‘arminators’ (we never say this word in the film :P). The shot has been tracked, the arminator built and rigged, the animation matched to the scientist’s movement, the guns tracked onto them, and a dozen other things.

Roman has spent a couple days working on this shot alone, extracting a perfect key and working with the new masking tools. 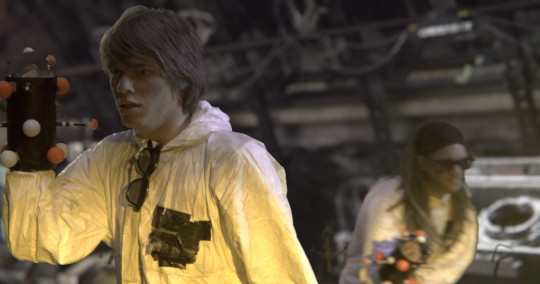 (as with everything else, still WIP. And oh my goodness yes we know there is sun on them and not on the tunnel)

The gratuitous slowmo shot. Dan pulls the gun out and stares at his hand as the gun unfolds from a compact bundle into the final expanded weapon as he nervously walks from the arminator to the makeshift barrier. This one is a doozy- Sebastian had to track both the background (which is barely visible/out of focus), and 3 unique guns. Even after it was tracked, Francesco had to go in and hand tweak all the different axis for the main gun, since the tracking device had some high-frequency wiggle (due to the lack of mass).

The main point of the shot is that the scientists are out of their element, having to put on these absurd weapons to face off against absurd robots, so making the gun as overbearing a presence in the shot as possible was important. It expands outwards over the course of the shot, and at the end he’s holding it right in front of the camera, almost blocking everything.

A few weeks ago I modeled a new scientist gun specifically to cover as many tracking markers as possible. The tracking devices all had balls that extended pretty far away from the actors hands, and obscured faces and such, and to avoid having to painstakingly paint out all the balls (a bit will still be necessary), this gun unfolds to have extended pieces that will occlude the trackers. Here it is unfolding (although probably 8 times faster than it will in the film).

Kjartan did some great shader work, and I went in and tweaked some of the colors and added decals. I think it’s a good looking gun! This is exactly the type of thing cycles is great at rendering. 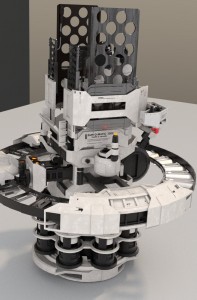 Additional complications to the shot:

Mmm. You can almost smell the hairspray. Obviously we’ll need to tweak some junk with compositing and all that (once we figure out colorspace and the like), but I totally dig this! Nice and kinetic.

We wanted to have the gun fire something that wasn’t a bullet, and wasn’t a laser. Kjartan put together a great proof of concept a week ago showing a cool compromise. This quick electrical cloud.

Unfortunately, when we put it into context in the scene, we realized it didn’t scale quite as well as we’d like when the distance was more than a few meters, both because it was so heavily simulation based, and because it just plain looked a bit weird (giant electro-cloud for a few frames = awesome. giant electro-cloud flying across a room = a bit wonky). We rethought it a bit and were able to keep all the same elements, but made it a bit smaller/faster, like an electric potato gun.

And what are the scientists shooting at? These guys! These are the robots made by Kjartan and Jeremy a few months ago- we’re finally putting them to use! Jeremy animated a half dozen of em approaching the scientists. I love it- it’s like a tower defence game. You can really feel how the robots are approaching faster than they can be shot down. Now we just have to make sure the timing of the robodeaths and the electropotatos match up nice.

And there’s another view.  I set up a camera to render an alternate view of the scene for cut-away options. Once we have the lighting/texturing finalized, if we ever have a night where the render farm isn’t busy, I’ll throw it up to give us a few more options (stuff like these are freebies! A couple seconds setting up a camera, a night of rendering, and BAM! More robot action shots.

So all in all, things are going well. TONS of experimenting. Days can go by of just troubleshooting why things aren’t working the way they should. Everything is taking a bit longer than expected- but we’re still starting out, and for the first time I’m really starting to see stuff that show the promise of the final :D.