Are we having them? Eh, nothing unexpected! But somebody asked if we could do a blog post about things that can become complicated on the actual filming front (we do tend to be a bit Blender-cenctric). The differences between making a film and making an animation. These are some of the things we’ve been having to think about over the past (and rest of this) week.

1.) Weather!
Every time you’re filming outdoors, you’re at the mercy of weather. Will it rain? Will there be sun? Fire and brimstone? If it’s ‘patchy clouds’ (very likely in Amsterdam), and alternating between direct sunlight and clouds, you have to be aware of that. If you’re cutting a conversation, and the sunlight changes between every cut, that doesn’t work. And even if you just try to go with whatever weather you end up with, some scenes won’t work in the pouring rain (or can get just plain horrific). Rescheduling a shoot day often means paying all the cast/crew/locations twice. It’s one of the bigger gambles…  (Sunny 89% of the time in LA, as opposed to about 50% in Amsterdam. And that sun is able to turn into rain in 5 minutes as often as not). Ton has demanded we have good weather though, so I’m optimistic.

We’re filming on location on the 20th. Current prediction: RAIN SO MUCH RAIN.

2.) Actors!
Can be fickle! Or get sick, or hit by cars, or fall in a canal (or pushed?!), or get lost, and not be able to come to the shoot. That can stop things dead in their tracks right there. Maybe they don’t speak English! Maybe they suddenly decided to shave their hair or dye it maroon! We’ve got some super great professional actors, so the odds are less that they’ll bail on us in order to go to a hella tight concert- but it could happen! And we’ll film the scene anyway and we’ll replace them with a robot wearing a hat that communicates using soundbytes from old public domain radio programs. Don’t think we won’t!

3.) Food!
Food is the backbone of any film set! I’m totally serious. Good food is important! It keeps people happy, and gives everyone energy. It’s the literal fuel of the shoot- and is almost always more expensive than most folks would expect. Do you have vegetarians on set? Or religious dietary restrictions? Allergies? Vampires? You gotta make sure everyone has food!

4.) Cost!
Costs always seem to inflate at the last minute. Problems you could normally solve with brains and patience are suddenly only fixable by throwin’ money at em, and there’s just no other way about it. We always try to be efficient about how we do things, but occasionally we just have to take someone’s word that something is being done the cheapest/most effective way possible. There are a lot of balances to hit; obviously we want to get the best footage possible, but in a lot of cases, ‘fixing it in post’ is kinda one of the points of the project, and if we can cut a corner on production for the same cost of bringing another artist on board for a couple months- and that artist could put that cut corner back, and do more besides- that’s a good thing to consider!

5.) Traffic!
For on-location stuff specifically, there are a lot of considerations. How many parking spaces do you need? Do you need to block the street? How much of the street? Are we bringing trucks, or vans (that is apparently an important distinction). What if the bridge has a lot of bicycles locked to it? We’re actually filming on a bridge, and we have permission from the city to redirect all the traffic, as long as emergency vehicles can still get through (which I think is very considerate).  We have a parking space reserved for putting a crane on- but even though it’s reserved, we don’t have any actual power to tow anyone. So it’s still a gamble. EDIT: Ton just walked in! We apparently now have power to tow folks! Francesco: ‘Every time you leave you come back with more power!‘

6.) A light exploding or falling on someone’s head or something!
Sometimes stuff just happens! 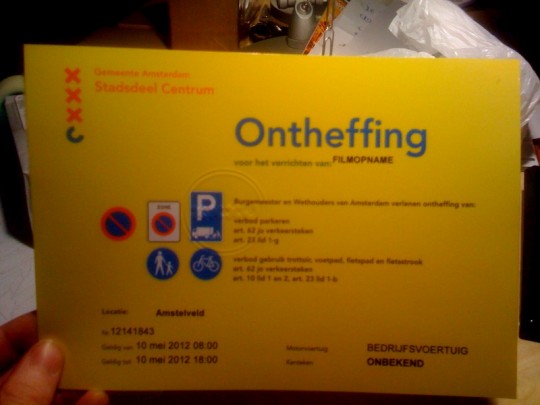 This is the document Ton got! The icons on the left represent all the laws the form lets us violate.